Skip to content
We are using cookies for a better user experience.
10/14/20
Neuburg a. d. Donau
Sport 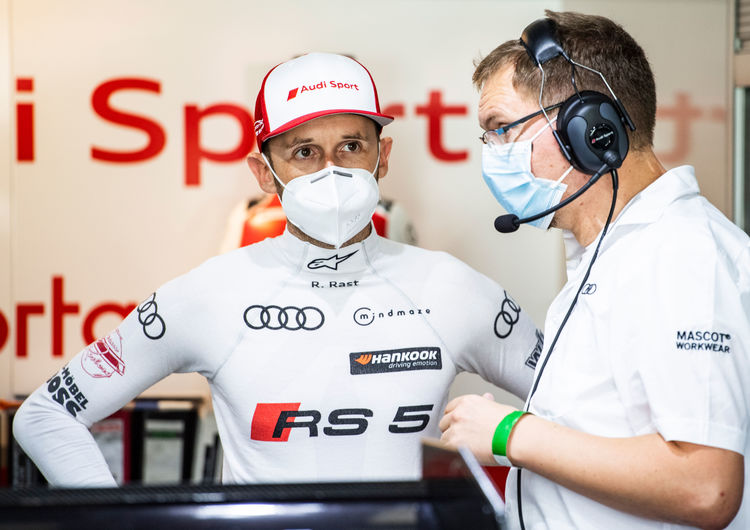 The reigning DTM champion René Rast looks back on the exhausting race marathon of the 2020 motorsport season and his double victory last weekend in the first two of four races in Belgium. In addition, the 33-year-old Audi DTM driver from Audi Sport Team Rosberg gives his take on what could be decisive in the fight for the DTM drivers’ title.

In the special 2020 DTM season, how do you celebrate as a racing driver after such a successful weekend?
At the race track itself, of course, it’s no longer possible as it was in the past. This is quite simply due to the strict corona measures that were correctly taken by the ITR and Audi. Instead, we had a nice small family dinner on Monday evening.

What is your motivation in motorsport?
My main motivation is of course to win. My goal is always to be ahead of everyone else. This year, I was not always able to do that, but maybe there will be a happy conclusion at the end of the season.

How do you recharge your energy reserves between races?
When I spend time with my family, I can switch off. I am then mentally away from motorsport. One or two days after a race weekend is usually enough to recharge my batteries and then I can focus fully on motorsport again. A weekend like this one in Zolder gives you an extra boost when you know that you’re fighting for the championship again.

Do you have any time for recovery between two directly consecutive race weekends?
You have almost no time to rest in between. I took a break on Monday, but today I’m already back in the motorsport rhythm with data analysis on the laptop and reading reports. I also exchange ideas with my race engineer Florian (Rinkes) so that we can be even better positioned for next weekend.

Given the very compact race calendars, there were concerns about the fitness of the drivers before the season. How have you coped with the year so far mentally and physically?
Overall it has been okay. Even though I have to admit that I had a damper, especially after August. In the months leading up to it, a lot of preparation was already on the agenda for my involvement in Formula E. Directly after the DTM season opener in Spa, the six Formula E races followed. In the end, I was only home for two days in August. That already cost me a lot of energy, but now I’m fully back again. Although we have driven DTM races almost every week, I have finally had more time to breathe again.

At the first race weekend in Zolder, your two victories set a clear exclamation mark in the title fight. As a team, did you put in more work than usual before the trip to Belgium?
After the races at the Nürburgring, we had two weekends to analyze the recent events once again. It’s quite possible that we made a step forward by doing so, but I think a big factor is that the colder temperatures play more into our hands. Before, we?have had more problems with overheating tires. In the current conditions, the tires are now wearing down in a completely different way and we seem to benefit from this.

Have you ever experienced a similar moment of shock in your career as just before the start of the race last Sunday?
I have been in many races, but honestly, I can’t remember anything comparable to that. I can only think of one race in the ADAC GT Masters. The ABS failed on the lap heading to the starting grid. We tried everything to get it running again, but it didn’t work. So, I had to drive the race without ABS, but I have never experienced a car catching fire just before the start.

It was also an example of teamwork. From your experience, is it typical in motorsport that everybody helps everybody else?
Yes, that’s how I have experienced it. In these situations, everyone tries to help each other. On Sunday, support came from all sides. Of course, from the other Audi teams, but also from BMW, who immediately had a small fire extinguisher ready. For me, it is a characteristic of motorsport that everyone helps each other in such moments in the paddock, no matter whether it’s someone from the same brand or a competitor.

Did we see your best DTM starting maneuver so far in the race last Sunday?
Just considering the time from zero to one hundred kilometers per hour, it was actually not a good start, I have already looked at the data. But, in relation to the difficult track conditions, maybe it was. I also have to say that it was thanks to a lot of luck, because Timo (Glock) and Sheldon (van der Linde) didn’t pull away well and I got through without an accident in the first turn. It could have gone very differently.

Similar track conditions are expected again for the second DTM event in Zolder. Does that make you feel confident?
Yes, because the colder track temperatures seem to suit us better. We were especially strong in the long runs, but also in qualifying. That’s why I’m very optimistic that we’ll be able to achieve good results in Zolder again. It could also be interesting when looking ahead to the finale in November, because it won’t get any warmer until then. So, there are many things that will make the title fight even more exciting.

You have finished on the podium in the last six races. How is it that you can always improve at the end of the season?
It’s mainly because we’re constantly developing our setup over the course of the season. With every race, I can adjust my driving style better to the car. And at the same time, my team helps me with the set-up by improving our understanding of what I need to be fast. During the previous weekends, I sometimes had the feeling of driving two different cars, that is how much we changed the car from one day to the next. In Zolder, we had the feeling for the first time that our basic framework was now in place. That gives us the self-confidence and the necessary peace of mind. Now, it’s all about the detail work. I think that’s where we are now. And it’s true, in the previous DTM years, we were successful in doing so.

For the first time since 1987, the DTM is only visiting Hockenheim once in a season. Do you as a team go to the finale differently than in previous years?
I don’t think that it will present us with too many problems. Of course, it was easier in the past years when we had the ITR test and the opening races at Hockenheim as a base. For the final, we were then mostly already quite sorted out. Now, it could be interesting as far as the set-ups are concerned, even if every team by now would have understood how to get the best out of the respective cars.

Before the expected showdown for the drivers’ championship, Nico (Müller), Robin (Frijns) and you will once again be competing in the Audi R8 LMS at the Spa 24 Hours. Are you worried that the difference in driving the GT3 cars will affect your preparation for the DTM finale?
Before Zolder, I even sat in two other race cars. First in the R8 LMS at the Nürburgring 24 Hours and then in the Formula E car during testing in Italy. So, it shouldn’t be a problem, especially since the time before the finale will be enough to get me ready to drive a DTM car again.

What are your tactics in the remaining races for your possible title defense?
Of course, we want to continue where we left off in Zolder, by concentrating on our strengths and above all, trying not to make any mistakes. That’s the key. But in the end, it will depend on the course of the races how many risks we have to take. It doesn’t always make sense to go all in for a victory. At Zolder, we saw how quickly you can lose points. However, if Nico or Robin are in front of me, I will of course do everything I can to finish ahead of them. And if I am in front, I have to weigh up how much risk makes sense. It will definitely be an exciting showdown.